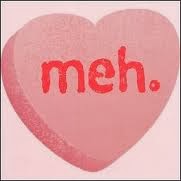 There is a box of Russell Stover candy that keeps mocking me.

Like most boxes of Valentine’s Day candy, it’s red, heart-shaped, and has shrink wrap that I can envision tearing off in a fit of unbridled, chocolate-loving passion.  But unlike most boxes of candy, this one costs around $40 and is almost the size of my 8-year-old daughter.

Every time I walk past it in the grocery store, pushing my cart with one wobbly wheel carrying maxi pads and cat food, I briefly daydream about sitting in the middle of my bed late at night, this heaping heart-shaped box of sugary comfort taking up my entire lap, and flipping back-and-forth between the two channels that always seem to show Will & Grace reruns.

If you haven’t guessed already…I’m single.

That’s because I’m part of a group that I lovingly refer to as “involuntarily single.”  Or, in other words, widowed.

But if I’m being completely honest here, I really haven’t looked forward to a Valentine’s Day since before I was married.  Oh, I know that sounds negative, but it’s true.  In elementary school I was always anxious for the afternoon party to start, my decorated shoebox just waiting for the thirty cards with scotch-taped lollipops to fill its empty cardboard belly.  In middle school, there was always the possibility that someone might slip a card in my locker, maybe even unsigned, which would give my girlfriends and me something to talk about for months.  And by high school, there was usually at least one boy who might hand me a wilted rose or at least buy me a Slurpee.

The Valentine’s Day excitement continued into college when I met my soon-to-be husband at the beginning of my freshman year.  By that winter, Brad and I were a serious item and he dutifully presented me with a teddy bear and a dozen roses that he had driven through a snow storm from his college to mine to deliver.

Two years later, we were married.  And that’s when the Valentine’s Day magic came to a screeching halt.

“I don’t like Valentine’s Day,” he told me that first February after I’d committed to him and couldn’t take it back.  “I never have.”

Knowing that Brad never liked to be told what to do (which made his military career interesting), I shouldn’t have been surprised that he wasn’t all that keen on the greeting card industry demanding that he buy me a card every February 14th.  I did, however, feel duped.

“But what about the last two Valentine’s Days when we were dating?” I asked in disbelief.  “You’ve always been so thoughtful!”

“Yeah, but I’ve got you now,” he said with a devilish look.

And while I was a little bitter about that sudden end to romance, I had no idea just how cheated I would feel when he was gone and I had no one to shoot dirty looks to over my Valentine’s Day pizza.

Like most widows out there, Valentine’s Day has become the holiday I dread the most.  Sure, Christmas is hard, Thanksgiving is no picnic, and I feel a little deflated around my birthday.  But there is nothing that screams “YOU’RE ALONE” like Valentine’s Day.  Going to the store on February 14th and seeing all of those men running out the door with bouquets of flowers and panicky expressions makes me slightly bitter now that I know I can’t even anticipate the disappointment I used to feel when my husband would show up empty-handed or with a “You know you’re a redneck when….” Valentine’s Day card.  All of those commercials that say “Every kiss begins with ‘K’” (although I disagree – most kisses begin with a pitcher of beer), make me want to smack someone.  And that bright red aisle at the grocery store that has as its centerpiece that enormous box of candy is almost too much to bear.

It’s not the being single part that’s hard – that I can handle.  It’s the absence of something I used to have that still shocks me and takes my breath away.  Sometimes, I just want a deep, sweet, unbreakable kiss so much it’s painful.  Sometimes I want someone to just call me and ask about my day.  Sometimes I want someone here I can turn to and say, “Hey.  The pipes froze last night.  Take care of that, would you?”

I don’t miss them all at the same time. I don’t need someone kissing me, listening to me, and fixing my plumbing all at once (although if a man came to my door who could multitask like that, I certainly wouldn’t ask him to leave).  And I know I can function without those things – I’ve been proving that for years.  But sometimes I do wish I could have those little pieces again – the ones that, together, make up a committed relationship.  I wish that, even though he might have come home empty handed on what should be the most romantic day of the year, I could go back to the days when just coming home was gift enough.

So, if you see someone standing in the middle of the Valentine’s Day aisle with a mixture of sadness and panic written all over her face and nothing but cat food and feminine hygiene products in her cart, press $40 in her hand and say, “Go for it, girl.”

That could just be the most romantic thing she has to look forward to this year.

Why I'm the Best 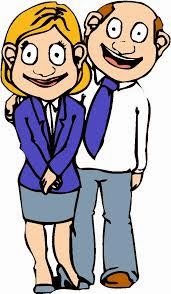 The last few weeks have pretty much passed by in a blur.  As much as I've been trying to "live in the moment" and "soak it all in"...a book release is not the glamor and glitz you might think it is.

Oh, I know that you all must picture me sitting in my office in yoga pants and a tiara, but you're only half right.  Despite the fact that I've had several people say, "You must be raking it in" and even my children have asked if we can go to Disney World (to which I've replied, "No, but maybe you can go to college"), book earnings are usually nowhere near the lottery winnings that everyone apparently envisions.

No one sneaks into my house to roll out the red carpet, leading from my bed to the stove so that I can make my kids breakfast every morning (I thought that was in my contract?).  There have been days when I have been locked in my office so long that my shower happens around 3 PM, just so I don't have to hear my kids say, "You didn't shower?  Again?"  In fact, aside from the extra set of Sharpies I've had to buy myself, everything has pretty much stayed the same.

Yesterday I had my second book signing, which took place at BookPeople in Austin.  As was the case at the Tattered Cover here in Denver, I panicked for a solid week, picturing empty chairs and one, lone store employee slowly clapping at the end of my reading.  But, as was the case in Denver, I was surprised to see seats filled and people actually paying attention to what I was saying (something I'm not used to as a mother of three).

But there was one person there who actually seemed to think I was the best.  One pair of eyes that never glanced at his phone while I spoke.  One person who stayed until the very end to soak up time with me.

My dad has been in Austin all month, looking after my grandmother who is slowing down quite a bit (and who I was so happy to visit a couple of times while I was down there), which was part of the reason I scheduled the signing when I did.  Between the twists and turns of the Austin streets, the detours due to construction, and pedestrians who seem to be more confident in their invincibility than in any other city I've ever seen...if my dad hadn't been there I would have either shown up to my Saturday signing on Tuesday, or I'd be in jail for hitting one of the many bearded jaywalkers wearing a "Don't Mess With Texas" t-shirt.

But my fan club doesn't end there.  Because before I could even book my ticket to go, there was one person I had to clear my schedule with.  One person who makes what doing what I do possible.  One person I call immediately not matter what has happened - the first person I called when Brad had been in his accident and the first person who called me when I made the local bestseller list.

Not only did she watch my kids, she went through all of their closets and put together a huge bag of clothes to donate (something I haven't had time to do in months) and had dinner and a homemade pie waiting for me when I got home.  Since I've been a single mom, she has offered to take the kids at the drop of a hat (something that, believe me, I appreciate every day), take me out to lunch when she knows I've been stuck in my own head for too long, and boldly tells me that I need to go in for a therapy tune-up when she sees me slipping.

For those of you who have read my book, you know that beyond my kids and me, my parents played the largest roles in my story.  Part of that was because they were always here, present, waiting for me to tell them what I needed.  But part of that was also because they have been my biggest fans, champions, and the people who had no doubt that I could do what I've done - even when I stopped believing it myself.

They were with me at my lowest and support me during my best times.  They have shared in every moment of this process - talking me down from the ledge when things weren't going my way and celebrating with me when they did - and will continue to be my constant as I go into this next phase in my life.

Make no mistake.  I could not do what I've done without them.

So, even though I am constantly plagued with self-doubt, there is a little part of me that knows that I will actually always be the best.

PLEASE NOTE: My parents look nothing like the people in the picture.  I just thought those two looked like they really wanted to be used in a blog and I couldn't let them down.  Actually, now that I look at the picture again, they kind of look like a couple with bladder control issues.

If you want to see what my parents actually look like...you'll have to come to a signing. 'Cause they'll be there.   ;)
Posted by Widow Chick at 9:56 AM 6 comments: