So, I was at my Yin Restorative class this morning and, once again, the instructor said something that got me thinking.  I both love and dislike it when this happens because it gives me a lot of food for thought, but it also makes me want to shout out, "Wait!  Say that again. Does anyone have a pen hiding in their skin-tight yoga pants so I can write this down?"

Needless to say, shouting is frowned upon when people are trying to restore their yin, so I'm forced to chew on it for the rest of the class until I can run to my car and try to make sense of my own "monkey mind."

The theme this morning was acceptance of mind, body, and spirit and so much of what was suggested applied to me and I suspect many others.  Because complete acceptance of who you are is an incredibly difficult thing to achieve and probably only really happens in fits and spurts.

But when it does...what a an amazing release.

Hey.  If you're going to do something do it well, right?

This isn't as much about denying grief as it is denying the experience and who we are when we come out the other side.  I don't deny that I have grief and probably always will in some way.  But I think I've almost always had a hard time accepting myself, my value, and the things that only I can offer this world.

I realized this a couple of months ago when I began seeing a new therapist.  Within the first few sessions, I noticed that I started almost every thought and feeling with the phrase, "I know this sounds terrible, but..." and then finished the sentence.

And the second I realized I was saying that, I immediately stopped.  It was as if I was constantly admitting to myself and whomever I was speaking to that what I was about to say didn't have worth.  It didn't have value.  And it does, whether someone agrees with me or not.

The other thing I think I've been doing my entire life is asking the question, after expressing a thought or feeling, "Is that bad?"  It took many counseling sessions for me to realize that it's important that I stop doing that or even allowing that thought to enter my brain.  Because many things in life aren't actually good or bad (except the biggies:  donating to a charity - good; committing murder - bad).  Many things just are and by asking approval when expressing a thought or feeling...what an unnecessary headache I've been giving myself all these years.

No wonder my mind has been churning for so long.

I know I'm not the only one. I have been asked countless times my thoughts on when it's okay for someone to start dating, whether or not they did the "wrong" thing at a funeral, what an appropriate timeline is regarding several different aspects of widowhood.  "I think I want to move from the home my husband and I shared our entire married lives.  Is that bad?"

It's not good or bad.  It just is.  It's how you feel. You don't need my approval or anyone else's.  It's where you are in your life in the moment.

Throughout the last few months, I've grappled with the whole acceptance thing.  Actually, I've done that a few times throughout my entire life.  And I'm not talking about not accepting that my husband died or anything like that.  I'm talking about accepting where I am in the here and now, whether it's a good place or bad, and accepting it for what it is.  I've spent so long trying to back-peddle against the things I didn't want to have happen and not stopping for a moment and saying, "Okay.  This is it.  This is your struggle.  Accept it."

"You have anxiety. Accept it."

"Life is not what you thought it would be.  Accept it."

What a liberating feeling it is, those moments when I'm truly able to digest that.  It's freeing.  It's a gift.  Right now it's a conscious decision to make my mind go there, but I'm hoping that at some point it will be effortless.

I'll have to work on it.

Haven't Most of Us Been There? 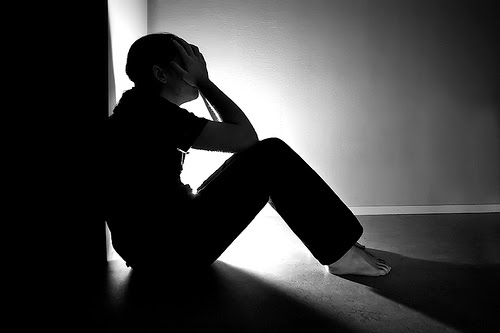 I was going to write about something different today.

With all of the stuff that's been going on in the last couple of weeks...I had a lot to write about.  But I'm sure I'm not the only blogger this morning who is changing her mind on her subject matter.

Yesterday I posted on Facebook and Twitter that his death was making me feel a little weepy.  I read at least one person's response that was something like, "Not me.  I didn't personally know him."

And I get that.  I really do.  When you've been through what we have, we usually don't have the energy to grieve someone we didn't even know - we're too busy trying to breathe in and out after losing someone we never thought we could live without.  So I certainly understand that.

I'm not usually one to grieve the loss of a celebrity either.  Sure, I feel sad knowing that yet another family out there is going through what I've experienced.  But I usually don't feel a small catch in my throat like I did yesterday.

Maybe it's because I always looked forward to whatever he was in - whether it was a movie, TV show, or even just a short interview because I knew he would always do something so unexpected.  Maybe it's because I find it so incredibly sad that someone who seemed so joyful and always had a twinkle in his eye was probably in unbelievable pain for most of his life.

Or maybe it scares me just a little bit about my own.

I would think that almost all of us in this community have probably been touched by suicide and depression in some way.  Either we've lost a spouse or partner to it or we have felt our own depression and hopelessness at some point along this journey.  I know I have certainly looked down that abyss a time or two, but the difference is...I've always either been able to talk myself out of it after a certain amount of time or I've been able to find resources to get the help I've needed.

These last few months have been different for me.  When I started experiencing such overwhelming anxiety that prevented me from leaving my own house some days...that scared the crap out of me and the last six months have been a constant struggle to find a solution.  I haven't been able to talk myself out of it and there have been moments when I find it almost impossible to get a handle on it.

For the first time, I know what it's like to not be able to control my own thoughts and have a physical reaction because of it.  I have no idea when or if I will be able to get a handle on it and the prospect of always living this way is exhausting.  It's one thing to feel sad or slightly out of control because of outside forces.  It's another thing entirely to carry it with you always and have no idea what triggers it and, therefore, really not know how to "cure" it.

For the first time I think I understand depression in a way I never have before. I understand how it has the capacity to take over your life.

Now, I've heard from several people that anxiety and depression go hand-in-hand and while I don't feel depressed...who knows?  Maybe I am.  I don't feel that my life is unlivable, but because of this experience, I now know what it's like to feel your life spiral out of control from the inside out and I have a new, enormous sympathy for the people who just can't take it anymore.

Because I really don't think anyone would make a life-ending decision unless they feel like they have exhausted all of their options.

And while I'm so sad about Mr. Williams' death, it does seem to be opening up conversations about depression and suicide that should probably happen more often.  Because I think that while most of us knew that he had addiction and depression issues, what we saw publicly was a laugh and smile...so the problems were easily dismissed.

I'm wondering if the outcome of this could be that we look at each other a little differently, and really wonder and care what's behind every smile we see.
Posted by Widow Chick at 9:01 AM 1 comment: